Kicking grief
where it hurts 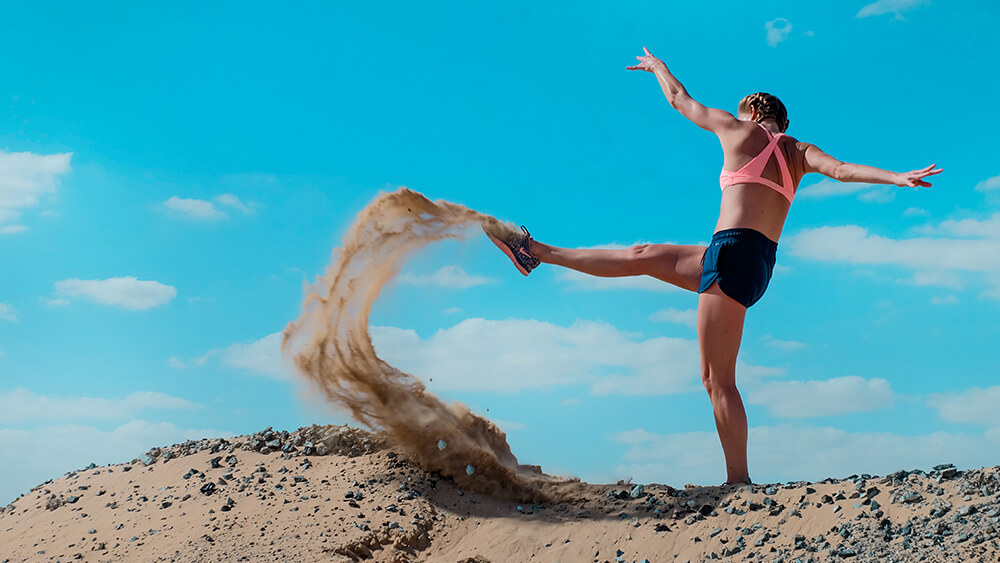 Kicking grief
where it hurts

I’ve always known about the power of exercise in lifting mood and creating those feel-good endorphins. But I never really thought it could actually alleviate real grief and despair. Until I had to. My mum died in December 2018, and it hit me hard as you’d expect. She had been poorly but it still was a huge shock to lose her suddenly in the end. In fact, it totally floored me.

Those first weeks were a blur. I couldn’t face getting out of bed sometimes; facing the day was just horrendous. Once I’d got the kids off to school, all I wanted was to crawl back under my duvet and shut out the world. But I had to get back to work, to motivate people who had paid good money for my classes. They were days away from reaching the end of a tough fitness challenge and wanting to feel amazing in a Christmas party outfit. Christmas wasn’t even on my radar anymore. Physically I felt like lead, aching and exhausted. Smiling felt wrong. Even speaking felt hard. How could I, the state I was in, motivate others without falling apart?

Of course it’s my job to exercise, and (as with any job), eventually you just have to crack on and turn up. Maybe it will be a distraction, I hoped. I dragged myself there and put on my best stage face. And once I got through the door, talked to people and launched into a few moves, something else took over. I actually left feeling uplifted, energised - laughing with my friends and everyone taking part. Escaping my own head for an hour felt like a relief. It wasn’t a cure, I still felt pretty awful later on, but just managing this first hour was a start. And I knew I could keep going. I had to!

Talking to my friends was another positive step. People expect me to be a ray of sunshine and 99% of the time, I am. So it felt pretty odd to admit feeling so sad and lost. But once I started to offload, it felt more bearable. Friends wanted me to be honest and soon enough were sharing their own experiences. I felt comforted just knowing I was less alone. We’re terrible at opening up about grief. We’re meant to be grown ups and just deal with all this. But we’re still human beings and loss, at any age, is still loss.

The same goes for relationship losses. I’ve been there and I see lots of my clients dragging themselves to classes to get a break from the most horrendous situations. They might seem broken and lost, living on auto-pilot, but just getting their gym kit on and out of the house is a huge achievement. It might be half-arsed, like wading through treacle, but I firmly believe exercise picks you up when you feel like you’ve been hit by a bus. Be it punching, running or just putting one foot in front of the other, moving your body can help you feel not just physically stronger but mentally more positive and able to cope. Studies show that aerobic exercise can boost mood in patients with major depressive disorders and is now prescribed by the NHS.

Recently, I was blown away by an email from one of my 6-week challengers:

"I’ve made no secret of my mental health issues and that being the primary reason as to why I started these sessions. But on top of that, my whole life I’ve had issues with eating/dieting and the never-ending cycle of lose weight, gain weight, feel like a failure, repeat. I never thought exercise was for me. I actually found it easier to starve myself than get myself to do regular exercise.

However, since joining your classes 6 weeks ago, my mental health has improved beyond recognition (I’m now well enough to return to work on 4th March, yay!). And for the first time since I was 12 years old, I feel happy with myself and have an acceptance of myself like I’ve not had before. I’ve still a long way to go in terms of my fitness/body journey and I’ll have to dig deep to find the motivation for those 6.15am classes when I’m back at work and my new version of ‘normal life’ resumes. But I really hope that, after 29 years of abusing my body, I’ve finally found my happy place! So thank you xxxxxx

That message alone inspires me to get up, put on my stage face and go do some exercise. Honestly, it can’t hurt more than you already do. Whatever stress you might be under, just get through the days and be kind to yourself, be it with exercise, friends or both. Believe me, you will laugh again soon.

GET IN TOUCH WITH LOUISE